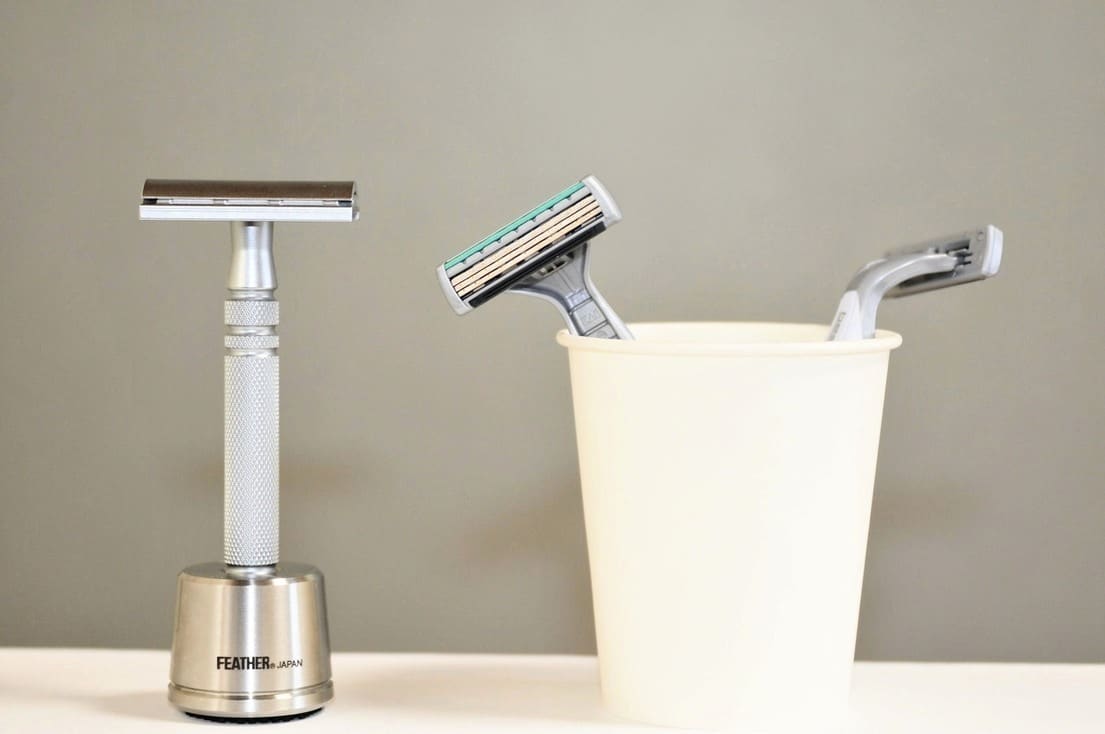 Traditional style shaving using a Safety Razor has seen somewhat of a resurgence over the last few years. I and many other people have discovered the benefits, of these razors, over modern cartridge systems.

What exactly are the benefits of shaving with a safety razor?

Let’s look into that list in a bit more detail.

The reason I originally began looking into DE shaving was because of the skin problems I was having as a result of cartridge shaving. I had trouble with breakouts under my mouth and very painful shaving rashes under my chin. This was making me dread shaving so I would put off the inevitable as long as I could only to find that shaving longer hair made the problem worse.

I remember watching a Gillette advert on TV and it showed the multi-blade cutting process. It claimed to offer a closer shave by first lifting the hair from the skin and cutting ‘aggressively closer in one effortless stroke’. What it was doing, in reality, was cutting the hair below the surface of the skin. Now, this may feel nice and smooth initially but I believe it to be a major factor in causing irritation, razor bumps, shaving rash, ingrown hairs. In fact, all the problems I was suffering with.

When using a cartridge system one is also more likely to be using the aerosol dispensed gel or foam sold by the same company as the razor. I don’t believe these products offer the best pre-shave preparation for our skin. This is a major contributing factor when it comes to post-shave skin problems. Preparing your own lather using a good quality shaving soap and brush pays dividends in terms of quality of shave.

There is also the question of pressure. Applying downward (towards the skin) pressure on the razor can be a cause of post-shave irritation. Due to the design of a cartridge razor, downward pressure is almost always a necessity. There is no need to apply pressure with a safety razor, the head design and the angle at which the blade sits on the skin, removes hair efficiently without pressing down.

All of this adds up to a more pleasant experience, I found it especially for sensitive skin. I noticed immediate improvements when I switched from cartridge to DE. Granted, there is a bit of a learning curve. In essence, one has to learn a new skill or should I say re-learn a better way of using an existing skill, but it doesn’t take long to become proficient and the benefits far outweigh this small downside.

The cost factor was not a major draw for me. I was originally looking to shave without causing skin problems, but when you look into how much money can be saved by switching to a safety razor, it can be quite substantial.

A quick search on Amazon brings back a 10 pack of Gillette Fusion cartridges for £18.50. The manufacturer claim is that each refill will last around 1 month. I haven’t personally tried these but judging by the Amazon reviews, there doesn’t seem to be many people who are getting them to last anywhere near that length of time.

Compare this to a box of 100 Derby Blades for £7.99 which includes a free stick of Arko shaving soap. It’s generally assumed that a DE blade will perform well for 3 shaves. Some people use them for more, some less but 3 seems to be a good average. You can do the maths yourself but it’s plain that the DE blades will come in considerably cheaper.

There is an upfront cost to buying a razor for your blades but there is also a cost involved when you invest in the new handle for a cartridge system. What you can guarantee with a safety razor is that you won’t need to change it every year or two in order to keep up with the latest iteration of cartridges. I have bought safety razors which are over 100 years old and they still perform well with modern blades.

A hot topic at a time when many people are actively seeking ways to reduce their impact on the environment. Everyone can see that plastic pollution has become a major issue, you can see the effects yourself just by visiting a beach. With this in mind, people are seeking alternatives to single or low use, disposable plastic items. According to Statista Research Department

This statistic shows the usage of disposable razor blades / shavers in the United States from 2011 to 2019 and a forecast thereof until 2023. The data has been calculated by Statista based on the U.S. Census data and Simmons National Consumer Survey (NHCS). According to this statistic, 159.79 million Americans used disposable razor blades / shavers in 2019. This figure was projected to increase to 161.88 million in 2023.

Almost 160,000,000 people in America alone are using disposables of some description and 2,000,000,000,000 per year, are being dumped. 2 Billion That is a vast amount of plastic being thrown away every day. What makes matters worse is the lack of options to recycle the cartridges and old handles.

Gillette has started a recycling scheme but it is only available in the USA and from what I can see on the map, drop off locations are not readily available. There is a postal service which looks to be at cost to the consumer.

So there you have my reasons for switching from disposable to Safety Razors. If you are thinking about making the switch (since you are reading this then I guess you are) and want to know some well respected and cheap options for a beginners kit then have a look at my article here. I haven’t looked back since I made the decision in 2009. I am sure you will feel the same way once you give it a try.