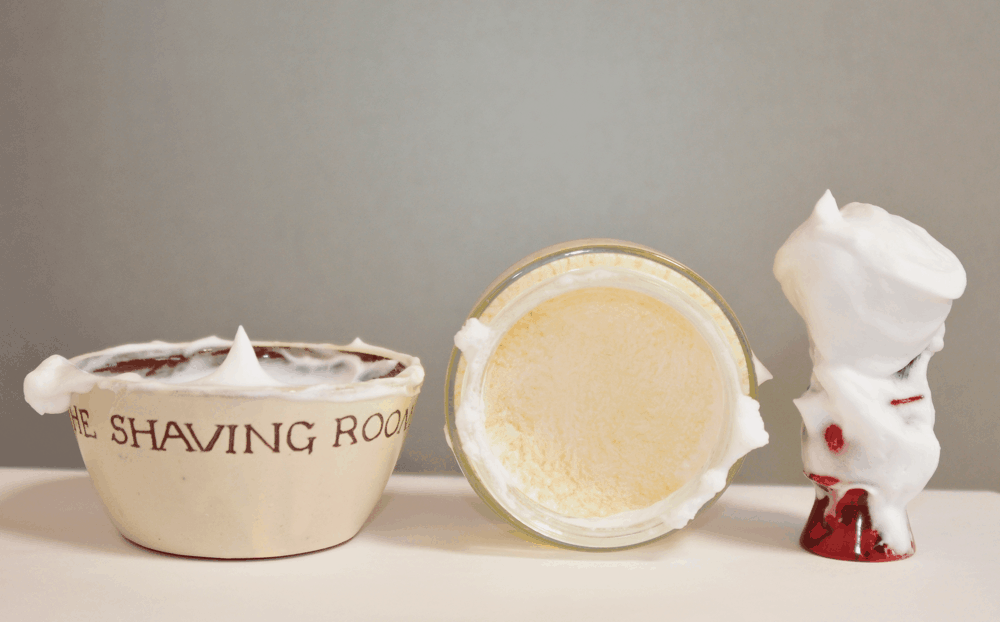 What’s in my shave soap?

First of all, a shave soap is (almost) exactly that, a soap to shave with. Traditionally, soap is a mixture of fatty acid alkali salts derived from fats and oils. Soluble fatty acid salt molecules (i.e. the fatty acid salts with sodium and potassium) have this property that they have a ‘salty’ region that wants to dissolve in water, and a ‘fatty’ region that wants to dissolve in fat. If you mix water, oils and soap, this property of soap helps to ‘disperse’ the oil in water, usually in the form of small oil droplets that are coated with soap molecules; these soap molecules bury their fatty region in the oil droplet, and if there are enough molecules on the surface of the droplet, the surface that is presented to the water in which the droplet float consists entirely out of the ‘salty’ regions of the soap molecules. This makes the oil droplet want to stay in the water. Because soaps can thus ‘solubilize oils and grease on skin and other surfacese, they have a cleaning action.

Fats and oils from animal or vegetable origin are compounds of different fatty acids (three per molecule) and glycerol, a ‘triple’ alcohol. This glycerol/fatty acid compound can be split into glycerol and the individual fatty acids in a number of ways; one way to do this is by the action of strong lye, a concentrated solution of sodium or potassium hydroxide in water. The result of this action is a mixture of glycerol and sodium or potassium salts of fatty acids, i.e. soap.

Traditionally, homemade soap was made from animal fat (either harvested directly during butchering or more commonly rendered from waste cooking fat) and potash; this would yield a soft (potassium) tallow soap. Hard soaps (sodium soaps) only became available when industrially prepared sodium hydroxide became available in sufficient quantities. Homemade soap (almost) always contains glycerin. Commercially prepared hard soap is usually separated from glycerin, since soap is more easily processed when it doesn’t contain glycerin, and b] glycerin is a valuable chemical feedstock in and of itself. Most industrial glycerin is obtained from saponification (i.e. splitting) of fats and oils.

Unlike with other commercially available soaps, glycerin is not removed from shaving soap made from fats and oils. This is because the presence of glycerin in soap makes it slightly less harsh for the skin. Also, unlike most other modern soap-like products, shaving soap is still based primarily on fatty acid salts. Most other ‘soap-like’ products, such as hand soap, toilet soap, liquid soap, shampoo, and shower gels, contain primarily synthetic detergents, such ALS, SLS, SLES, polysorbates, etc. This is because the primary function of shaving soap is not cleansing, for which there are much better detergents, but lubrication of the razor and hydration of the beard hairs. For this, the primary action of a shaving soap is the creation of a profuse, wet, stable and durable lather that dries on the skin only slowly. Fortunately, the alkali salts of selected fatty acids are still the best ingredients for this. Even many modern shaving products, such as aerosol (canned) shaving creams, are based primarily on alkali or triethanolamine salts of fatty acids.

In order to make a creamy stable lather, a soap requires at least two ingredients, viz. a high percentage of stearic acid salts and a high percentage of potassium soaps. Potassium soaps are both softer and more water-soluble than sodium soaps. This higher solubility makes for higher concentrations in the water films that constitute the skins of all those foam bubbles. The higher the concentration of soap in this water, the lower the surface tension, and the better the bubbles stay as they are, rather than combining into larger bubbles. This makes for a stable lather. Stearic acid makes for a profuse creamy lather with small bubbles. Together, potassium stearate makes for a creamy, stable lather. There is no animal or vegetable fat or oil that contains enough stearic acid by itself to make a first-class shaving soap. Some combinations come close but need to be artificially improved to get something that is on a par with commercial preparations. Most commercial preparations, therefore, consist for a significant portion of pure stearic acid salts; this stearic acid is usually prepared by separating the individual fatty acids from processed fats and oils, usually from palm oil, which contains a reasonable percentage of stearic (next to palmitic) acid, while also being cheap. The other fatty acid feedstock for the soap industry is coconut oil, which contains primarily smaller fatty acids (lauric and myristic acid), that are better cleansers than foamers.

Oh, and to briefly tackle a common misconception: NO, fatty acid soaps are not better, or milder for the skin than synthetic products. Most synthetic detergents approved for skin contact are much more gentle than fatty acid salt soaps with their pH of 9.5 to 10. Most home soapers don’t know much about either chemistry or toxicology, and even if they did, they would still fall for the ‘traditional is always better’ ruse.

Now, with a basic understanding of soaps in general and shaving soaps in particular, we can tackle the ingredient list of a well-known commercial shaving soap. Note that since soaps are regulated as cosmetics in the EU, all ingredients need to be listed in order of (weight) percentage. This makes the actual composition of any (shaving) soap a public secret. The situation is similar in the US, with two exceptions: First of all, pure soap (containing ONLY fatty acid salts and glycerin, or said differently, made from saponification of fats and oils) is not regulated as a cosmetic. Secondly, unlike in the EU, where the ingredient list should contain the actual ingredients in the soap (such as sodium tallowate and glycerin), in the US the label should list all ingredients used in MAKING the soap (so a sodium soap from tallow would list tallow and sodium hydroxide, even though it does no longer contain either tallow or lye).

This is a potassium/sodium soap made primarily with palm oil and tallow. A full potassium soap would probably be even better at lathering but would be too soft to process and use. The sodium salts make for a soap that can be handled better. BTW, the INCI has, in its wisdom, decided that salts from saponified fats and oils get this semi-scientific pig Latin names; sodium tallowate is the soap mixture resulting from saponifying tallow, while e.g. potassium cocoabutterate is what you get when you saponify cocoa butter (you can see that this is not a common ingredient in soap since otherwise there would have been a ‘better’ name that ‘cocoabutterate’); You can probably figure out for yourself what olivate or palm kernelate are. Cocoate is the soap from coconut oil. Aqua is water, the amount remaining after saponifying, which is usually done with lye, an aqueous solution of sodium and potassium hydroxide, and drying. The glycerin results from the saponification of the fats and oils and is not, as stated before, removed from a shaving soap. You’ll see that in a shaving soap formulated from individual fatty acids, glycerin is actually added. Glycerin acts as a ‘humectant’ or water binder, keeping the lather wet, i.e. preventing drying on the skin. It also is claimed to keep water in or near the skin. For that reason, some other humectants are sometimes added, such as propylene glycol.

Fragrances do not have to be listed, so that that part of a trade secret can still be kept, but can collectively be listed as ‘parfum’. However, individual components of the fragrance that are allergenic and are present over a certain level need to be identified. In this particular instance, those are limonene, geraniol and linalool, common ingredients in many flowery and citrusy fragrances, and amyl cinnamal, an almond-like substance. Orthotolyl biguanide is an antioxidant, keeping your soap from going rancid, and tetrasodium etidronate, pentasodium pentetate, and tetrasodium EDTA are water softeners, scavenging calcium and magnesium ions from hard water, that would otherwise diminish the lathering ability of the soap, and generate soap scum. CI 77891 is titanium dioxide, a common white pigment for cosmetics. The fact that it lists palm kernel acid means that it contains some free fatty acids, that were most likely added on purpose, since it is not easy to end up with free fatty acids from a saponification process, unless you explicitly add acids following the saponification, such as lactic acid. The function of the free fatty acid is usually to improve the ‘looks’ of the soap, making it look somewhat pearly.

This soap does not list individual fatty acid salts, and thus was likely made by saponifying palm oil and tallow, following which the other ingredients where added. No foam stabilizers are listed, so this may be a soap that doesn’t generate heaps of lather.

Let’s tackle another one: Institut du Karite soap, which contains:

This soap lists stearate explicitly. The stearate content will make for a harder soap with a better lather, so that it may contain more sodium salts and still be a good shaving soap. A higher percentage of sodium soaps will make for a soap that handles better during manufacture. Other ingredients not found in the Harris soap are isopropyl lanolate, an emollient (derived from but probably of purer form, than just lanolin), shea butter, a non-saponified fat, cetearyl alcohol and cetyl alcohol, both emollients, ceteareth-33 and polysorbate, nonionic surfactants that act as foam stabilizers, petrolatum (‘vaseline’) and dimethicone copolyol (a silicone oil), both lubricants.

With this, we have seen all ingredient groups except for the preservatives and colorants. Soaps are not particularly susceptible to going bad from bacterial or fungal growth (creams and aerosols, with their higher water content, are much more prone to spoilage), but many shaving soaps contain some preservatives, such as BHT or borax). Most shaving soaps are white since the lather will be white anyway, but some still contain dyes next to the common pigments.

Note that all claims about ‘nourishing’, mild, hydrating, and other fancy wordings that would suggest that soaps are good for your skin are B.S. A soap is a detergent that dissolves skin oils and fats, not replenishes them. Adding fats and oils only ensures that some of the soap is used to solubilize these oils and is not available to dissolve your skin’s fats. Besides, soap is alkaline, which is at least not good for your skin. Emollients impart a creamy ‘feel’ to any product smeared on your skin but don’t have any other physiological property. Glycerin and some other polyols may be absorbed by your skin, and by their hygroscopic action retain some water in your skin, thereby counteracting the drying action of the soap, but overall, the soap will still dry out your skin to a certain extent. So, all these additives don’t make a soap GOOD for your skin, only possibly less BAD.

Having said that, shaving with the help of shaving soap is still loads better than shaving without an agent that lubricates the razor and softens the beard, so, by all means, keep on using it…