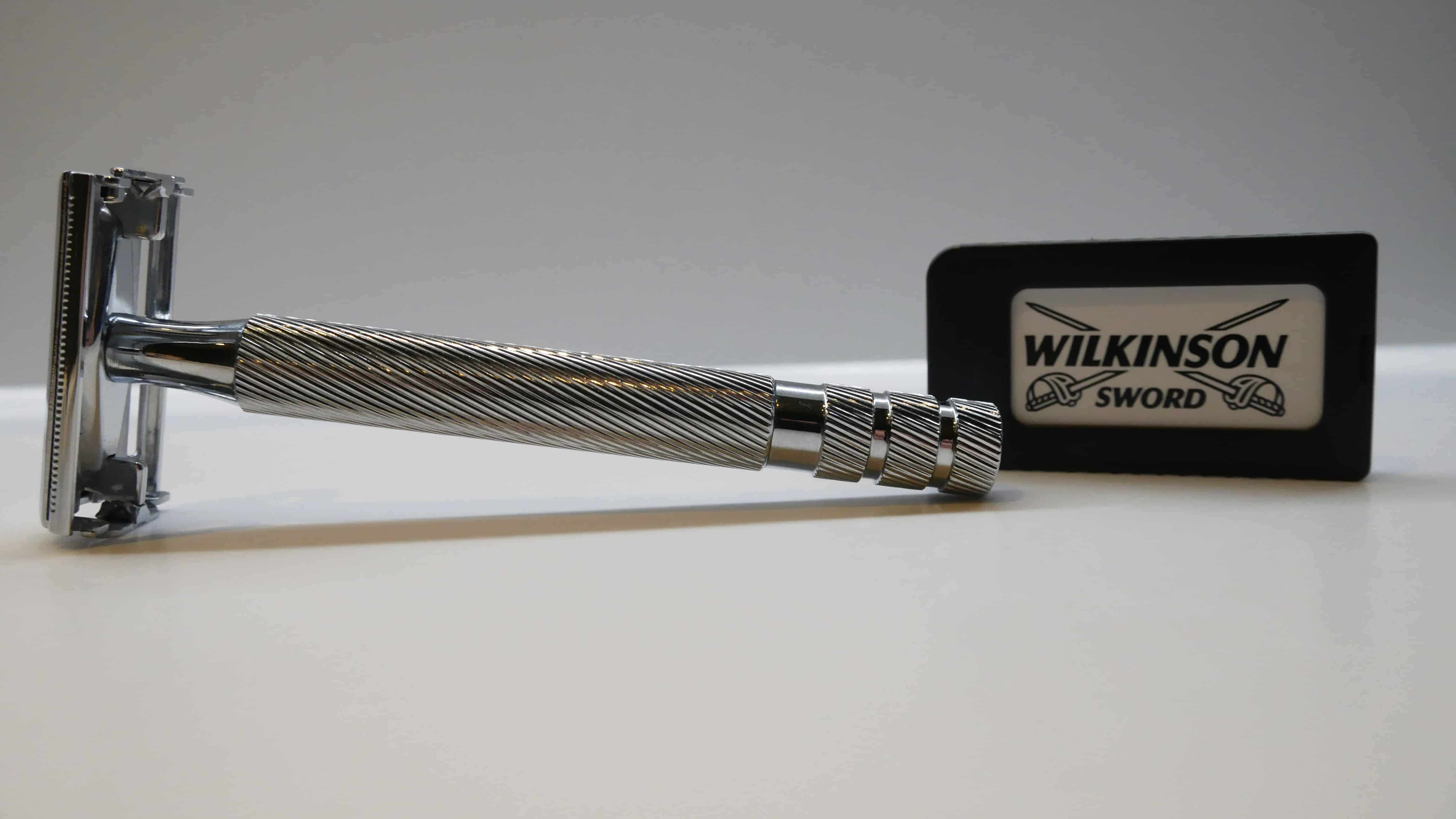 The Wilkinson Sword Classic is a twist to open double edge razor. The handle is brass and the head Zamak, both plated in chrome. My first, and probably many people’s, foray into DE shaving was with the plastic three-piece Wilkinson classic so I was interested to test this one out.

This is my review for the new Wilkinson Sword TTO razor released in 2019. I found it to be a very good razor for a few reasons. Mainly, performance, price and availability. It works well, it’s cheap and is readily available to buy on the high street in the UK.

Let’s have a more detailed look at the razor.

What’s in the box?

Packaged in a black and grey box, once opened it reveals a large plastic tray containing the razor and a pack of five Wilkinson blades in a plastic blade dispenser.

The box is quite large and the plastic tray/blade box may conflict with some peoples anti-plastic sensibilities. I think they missed a trick here with the decision to use the tray, it could have been marketed more as an alternative option for people looking to reduce plastic waste if they had a cardboard insert but I digress.

The razor handle is long with a type of barber pole knurling. It feels smooth and well machined but maybe not as grippy as I would like. The head is a twist to open with laser-etched branding.

Simple, twist to open system, the mechanism is operated by turning the bottom of the handle and both doors on the head open up to allow the blade to be seated. The locating bar centralises the blade however there is some lateral movement. What I mean by this is the blade can be seated off to one side. The result of this is that the blade lugs can protrude quite far outside the head if you are not careful. Of course, the blade can be seated centrally very easily but I think it’s worth mentioning. Once the doors are closed there is no movement.

I loaded one of the Wilkinson blades which came with the razor. Soap was Wickhams Magnum and a Yaqi 24mm synthetic.

First pass with the grain, the razor grips well in the hand. I had initial reservations with regard to the knurling but this was unfounded. I do find the long handle a little unwieldy though but that is a personal preference. There is good audible feedback if you find that important, and the blade seems to be working well. I haven’t used a Wilkinson Sword blade for many years and must admit to being pleasantly surprised.

No problems to report in the first pass. It feels smooth enough and efficiency is perfectly acceptable.

The head size is fine as far as TTO razors go, I much prefer a three-piece because the head profile is smaller which makes getting under the nose easier, but this has no issues here.

Second pass across the grain and the only complaint I have is with the handle size. I am finding myself changing grip locations to get it comfortable in my hand. It’s not a major problem, more a combination of preference and me not being used to using a long handle. The shave is done in my usual two passes with a good result.

No issues with post-shave to report. Aftershave today is one of my favourites – Blue Stratos.

I think this razor is an absolute bargain, I picked it up for £12 at a local supermarket and I think RRP is around £15. This includes the five Wilkinson Sword blades which performed well. As a starter razor you can’t go wrong, add this to the ease of being able to pick it up in almost any supermarket and it’s a big win for Wilkinson Sword.

It is definitely a step up in terms of quality to the original plastic classic (which in its self is also a great starter razor) and I for one am pleased that options like this are becoming readily available.

Criticisms are the aforementioned blade locator and the fact that the lugs stick out from the head, it didn’t affect my shave but it has the possibility to maybe catch on the nose but I am being quite picky in saying that. All in all a cheap and easily accessible razor which may get more people into DE shaving as an alternative to plastic disposables.