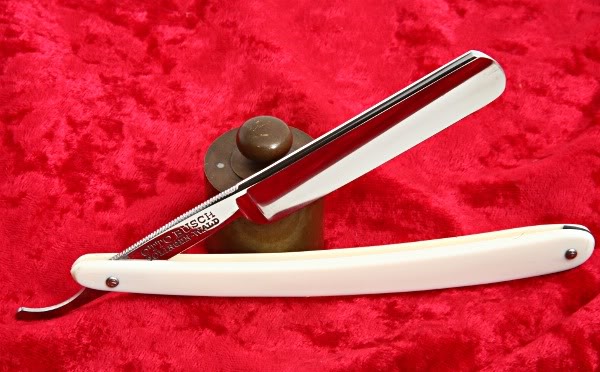 Neil Miller’s definitive guide on straight Razors and how to choose the best one for you.

As a beginner, the best options for a straight razor will be

Let’s breakdown that list into more detail and explain why these options are recommended for someone starting out with s straight razor.

Parts of a Straight Razor

One of the first queries is whether to buy a stainless steel or carbon steel razor. There are other types of steel (Damascus or pattern-welded, for example) but as the cost is usually prohibitive, we’ll stick with the two widely available options. Both types of steel have their pros and cons:

The next thing to decide upon is what sort of grind you want.

Grinding refers to taking metal off the face of the blade on each side. The following diagram shows a simplified progression from wedge to full hollow:

A wedge is at one extreme – it has no hollow grinding, so in section, it looks triangular.

They are great razors to use but require a long time to hone. This is because the whole face of the blade will sit on the hone and you have to remove all that metal.

A large piece of metal has been ground out of the blade on both sides, leaving a very light razor with a very flexible blade. It is far easier than a wedge to hone.

When you lay the blade on the hone just the spine and the tip of the blade touch the stone, so much less metal has to be removed.

There are all steps in between the full hollow grind and the wedge, of course! But we can break them down into this simplified sequence:

Wedge – Quarter hollow – Half hollow – Full hollow. Which one to choose is a matter of personal choice, but I would start with something near the middle of the sequence, a quarter hollow or half hollow grind. Then you can decide to get a thicker (less flexible) or thinner (more flexible) razor next time.

The point can have several variations in shape or style. We usually associate each style with how accurately the tip of the razor can be used. Some variations are just aesthetic – that’s human nature! The names used for the point styles can vary, but this is a list of a few of them, illustrated with some of my own restorations:

Like it says, the point is rounded, so it is a good choice for a beginner, as there are no abrupt transitions to a sharp edge, so less chance of cutting the face.

This variation has several sub-divisions and names, such as Irish point and Oblique point. The name varies according to the slope of the point – whether it is rounded or more straight – one with a straighter slope is generally termed, Irish. Its forte is in the accuracy of cutting – the spine stops well in advance of the edge, leaving a very precise tip to work with.

Also known as square points because the point of the blade is abruptly squared-off. This lends a great deal of precision – you can select individual hairs. It is also easy to dig it into your cheek. Not recommended for beginners!

This point has a notch ground into it and is also known as a notch point and sometimes a hollow point. There seem to be as many theories about this one as about Lord Lucan’s whereabouts, the main ones being that it is an aid to shaving nostrils and ears and that it was to help a barber open the blade. If the person shaving my face needed that amount of help to get the blade open, I’d be off before it touched my face. I prefer the nostril theory.

Blades with a barbers notch in them begin life as hollow points then the notch is ground below the spine.

There are other variations – Spanish Point and Dreadnought to name but two. The dreadnought is so-called because it resembled the prow of a battleship. The Spanish point looks like a gentle hollow point.

This heavy, wide type of blade is often referred to as a meat-chopper for obvious reasons and is said to be particularly good for shaving tough, wiry beards. The wider flexible blades take a bit of getting used to and aren’t really recommended for a beginner. A 5/8 blade is a good place to start.

From the above information it should be apparent that a good choice for a first razor is:

At this point, it might be useful to know what not to buy. This would include any of the new, cheap razors that you might see on places such as eBay. They are often bundled with strops, mugs and so on, and there are usually hundreds of listings for them. A number of different companies market them – I won’t list their names in an open forum.

They are usually made of inferior steel, poorly tempered, and mostly incapable of either taking or holding a sharp edge. If you need to save money, buy a good used classic razor from a trusted vendor that is shave-ready or stick with the tried-and-trusted makes such as Dovo or Thiers-Issard.

One last thing to remember if you buy a new razor, don’t expect it to be shave-ready. It may say shave-ready in the advertising blurb, but if you get one that is, count yourself exceptionally lucky! You usually have to factor in the cost of sending the razor to a honemeister. It makes the old classic shave-ready razors look an even more attractive proposition, doesn’t it?